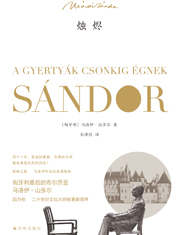 2015Embers is Maria's most well-known work, considered to be the peak work of Hungary's modern Romanticism.

In a secluded woodland castle an old General prepares to receive a rare visitor, a man who was once his closest friend but who he has not seen in forty-one years. Over the ensuing hours host and guest will fight a duel of words and silences, accusations and evasions. They will exhume the memory of their friendship and that of the General's beautiful, long-dead wife. And they will return to the time the three of them last sat together following a hunt in the nearby forest--a hunt in which no game was taken but during which something was lost forever. Embers is a classic of modern European literature, a work whose poignant evocation of the past also seems like a prophetic glimpse into the moral abyss of the present.